Call for Papers
Disability and Illness in Children’s Literature

Children’s literature, Lois Keith argues, has long tended to use disability and illness as metaphors, as “devices to bring the character through a period of trial and desolation into the bright light of resolution and a happy ending” (2001, 194). Where they are depicted at all, disabled and ill characters have mainly been described in terms of pity, their physical or psychological difference has been portrayed as a punishment for a transgression, or euphemistically glossed over altogether. Over the course of the last decade, however, a decided shift in the quantity and quality of children’s books featuring disability and illness has occurred, and an exciting trend seems to be emerging: the number of disabled characters in children’s literature is increasing and so is their psychological depth. From The Curious Incident of the Dog in the Night-time to The Fault in Our Stars, there are more narratives featuring disability and illness, and those texts tend to be more authentic, varied, and positive about non-normative characters.

interjuli 01/17 will deal with Disability and Illness in Children’s Literature. Possible aspects thereof are:

Please send in your manuscripts by August 1, 2016. Guidelines concerning formatting and editing standards will be sent out upon request and can be found at www.interjuli.de.

interjuli is an open access interdisciplinary journal dedicated to the research of children’s literature. 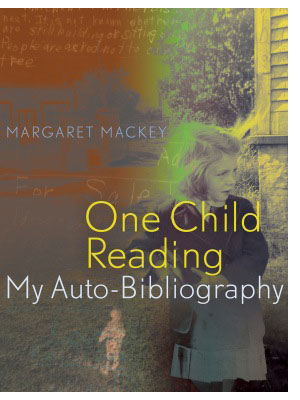 IRSCL member Margaret Mackey has just published One Child Reading: My Auto-Bibliography, a book that sets out to explore the question of what we can learn about the act of reading from a single child’s experience of becoming literate in a particular place and time. Dr. Mackey draws together memory, textual criticism, social analysis, and reading theory in an extraordinary act of self-study. Seeking a deeper sense of what happens when we read, she revisits the texts she read, viewed, listened to, and wrote as she became literate in the 1950s and 1960s in St. John’s, Newfoundland. The result is not a memoir, but rather a theorized exploration of how a reader is constructed.

For more information, read an interview with Margaret Mackey about One Child Reading in the Edmonton Journal.

Some topics include (certainly not limited to):

Please submit a 500 word abstract, current contact information along with brief biography (or CV) as Word attachments Debbie Olson at Debbieo@okstate.edu by 31 July 2016. Authors will be notified by 31 August 2016. The deadline for finished essays (using Chicago notes and bibliography style) is 31 January 2017.

Debbie Olson, PhD, is Assistant Professor of English at Missouri Valley College. She has edited or co-edited a number of collections on children and popular culture, including Lost and Othered Children in Contemporary Cinema (2012), Portrayals of Children in Contemporary Culture (2013), Hitchcock’s Children: The Child in the Films of Alfred, and Children in the Films of Steven Spielberg. She is the founder/editor-in-chief of Red Feather: An International Journal of Children’s Popular Culture and Series Editor for Lexington’s Children and Youth in Popular Culture Series.

Call for papers
Children in American Television: A Changing Landscape

Call for submissions to a two-volume collection that interrogates the child image in popular post-WWII American television programming.

These volumes seek to trace the American cultural landscape and its impact on the ways popular television (re)imagined childhood and children during each decade. We invite submissions that examine either children’s programming or programs that prominently feature children. These volumes will explore how US television has been a significant conduit for the public consumption of changing ideas about children and childhood. Submissions will connect relevant events, attitudes, or anxieties in American culture to an analysis of children or childhood in American television programs. Each chapter will focus on an era or series, with volume 1 ranging from the 1950s to the 1980s and volume 2 ranging from the 1990s to 2010s. Submissions may also consider how international TV programs respond to, resist, or negotiate with American television portrayals of children and childhood. We welcome submissions from a range of disciplines and theoretical perspectives, including television studies, cultural studies, childhood studies, feminism, sociology and social history.

Below is a breakdown of each volume and examples of programming:

1950s– Leave it to Beaver, Father Knows Best, The Adventures of Ozzie and Harriet (as myth of the perfect family/childhood), Howdy Doody, The Rifleman or children in the Western, Adventures of Superman, Mickey Mouse Club, Shirley Temple’s Storybook

American TV on the International Scene–how international TV programs respond to, resist, or negotiate with American television portrayals of children and childhood.

In addition, there is scope to include movies written, directed and produced specifically for television e.g. Born Innocent (1974), Dawn: Portrait of a Teenage Runaway (1976), Something About Amelia (1984), I Know my First Name is Steven (1989), etc.

Please submit a 500 word abstract, current contact information, and a brief biography (or CV) as Word attachments to both Debbie Olson at Debbieo@okstate.edu and Adrian Schober at beatles9@optusnet.com.au by 31 July 2016. Authors will be notified by 31 August 2016. The deadline for finished essays (which should not exceed 10,000 words, inclusive of references, using Chicago notes and bibliography style) is 31 January 2017.

Adrian Schober has a PhD in English from Monash University, Australia, and is the author of Possessed Child Narratives in Literature and Film: Contrary States (Palgrave Macmillan, 2004). He has published widely on the child figure in journals such as Literature/Film Quarterly, The Journal of Popular Film and Television, The Journal of Popular Culture, The Lion and the Unicorn and Senses of Cinema. He recently co-edited (with Debbie Olson) Children in the Films of Steven Spielberg (2016) for Lexington Books’ Children and Youth in Popular Culture Series. He also serves on the editorial board of Red Feather: An International Journal of Children’s Popular Culture.

Debbie Olson has a PhD in English: Screen Studies from Oklahoma State University and is Assistant Professor of English at Missouri Valley College. She has edited or co-edited a number of collections on children and popular culture, including Lost and Othered Children in Contemporary Cinema (2012), Portrayals of Children in Contemporary Culture (2013), Hitchcock’s Children: The Child in the Films of Alfred and Children in the Films of Steven Spielberg. She is the founder/editor-in-chief of Red Feather: An International Journal of Children’s Popular Culture and Series Editor for Lexington’s Children and Youth in Popular Culture Series.

This special issue of The Lion and the Unicorn invites submissions focused on children’s literature of the First World War from a variety of international perspectives. Among other things, essays could focus on:

Essays should be approximately 8,000 words in length. Please email your essay as a Word attachment to Dr. Jacquilyn Weeks at weeksja@me.com by July 1, 2016. Accepted essays will appear in the 2017 issue. For further information regarding publication details, particularly with regard to the use of illustration, please contact Dr. Hazel Sheeky Bird at hazelsheekybird@gmail.com.

Each year, the Children’s Literature Association is guaranteed one session at the MLA and can submit proposals for up to two more.* If you would like to propose a session topic, by June 5, 2016, please send to the ChLA/MLA Liaison (Kate Slater: slaterk@rowan.edu):
(1) a short description of your proposal idea, and, if relevant,
(2) the name of another MLA-affiliated entity (forum or allied organization) you plan to seek as a co-sponsor.

The ChLA Board will examine the proposals and select the top three (one guaranteed, plus two additional**) for submission to the 2018 MLA Convention, held in New York City, January 4-7.

*If ChLA chooses to submit two additional sessions, one of those sessions must be a collaborative session with another entity (forum, allied organization, etc.).

**The proposals for the two additional sessions are not guaranteed and will be reviewed by the MLA Program Committee. Please see the Planning a Convention Session page of the MLA Web site (https://www.mla.org/Convention/Planning-a-Convention-Session) for further details.

Secuencia: Revista de Historiay Ciencias Sociales, edited by the Instituto de Investigaciones Dr. José María Luis Mora, contributes to its field of expertise by occasionally publishing special themed editions coordinated by senior researchers in addition to its regular editions. These editions are a collection of original papers which, due to their thematic affinity, address certain issues from a specific point of view, allowing for deeper analysis of certain topics.

On this occasion, specialists are invited to submit research papers that are unedited, original and have been produced as a result of the evaluation of primary sources, to be included in the special edition on the topic of: “Childhood spaces and material culture in Latin America (19th and 20th centuries)” coordinated by Dr. Beatriz Alcubierre Moya and Dr. Susana Sosenski, which will be published in January 2018.

Over the past decade, the study of childhood has begun to make headway in the field of Latin American historiography in an increasingly instrumental way, establishing its independence from other academic traditions such as the history of education and the history of the family. This has given rise to the adoption of a wide variety of approaches, framed between social and cultural history, which allow issues to be addressed such as the construction of the concept of childhood, the definition and redefinition of age groups, and the development of sex-generic identities. In addition, links have been determined with very current topics such as health, demography, homelessness, crime, discrimination, violence, bullying, employment, gambling and consumerism among many others.

Given the number of topics that are directly and indirectly linked to the history of childhood, this call for papers is limited to a specific line of study. The special edition of Secuencia will be dedicated to the analysis of the spaces and material culture that were designed, constructed and developed for children in Latin America during the 19th and 20th centuries: amusement parks, shopping malls, schools, libraries, and children’s rooms in addition to objects, furniture, books, magazines, clothes, toys and so on, which led to the reshaping of the notions of childhood and child practices. All of this was framed in political, economic and social contexts largely determined by the development of the consumerist society. The objective of this dossier is to compile a collection of papers which discuss the relationship between spaces, material culture and childhood in the creation of everyday life and child identities in the Latin American context, contributing to the development and consolidation of a historiographical tradition focusing on the study of childhood.

The papers must adhere to the guidelines of the journal Secuencia (regarding length, academic quality and publishing criterion), available for consultation at the following website: http://secuencia.mora.edu.mx/index.php/Secuencia/pages/view/Para%20Autores

The deadline for the submission of papers is November 30 2016. Papers will be submitted to a double-blind review. The entire process of the reception of papers and reviews will be carried out by the OJS publishing administrator. The coordinators responsible for this special edition will conduct a previous selection of papers before submitting them for review with the help of Secuencia journal’s Editorial Committee. The result of the review is not open to appeal. Those papers which are not selected for publication in the special edition will be considered for a regular issue of the journal.

The project Chasing Mythical Beasts…The Reception of Creatures from Graeco-Roman Mythology in Children’s & Young Adults’ Culture as a Transformation Marker explores how mythical creatures change when incorporated into the evolving youth culture. It is supported by the Humboldt Alumni Award for Innovative Networking Initiatives given by the German Alexander von Humboldt Foundation to its Alumni across the world. The Award is designed for all disciplines, in order to promote pioneering formats for multilateral academic cooperation and to enhance understanding between individual countries or cultures (see website for more information).

We are meeting on May 12-15, 2016, for an international conference under the Honorary Patronage of the Polish Young Academy, to present and discuss our research results.

A special exhibition of illustrations and photos at the University of Warsaw’s Gallery will accompany the conference.